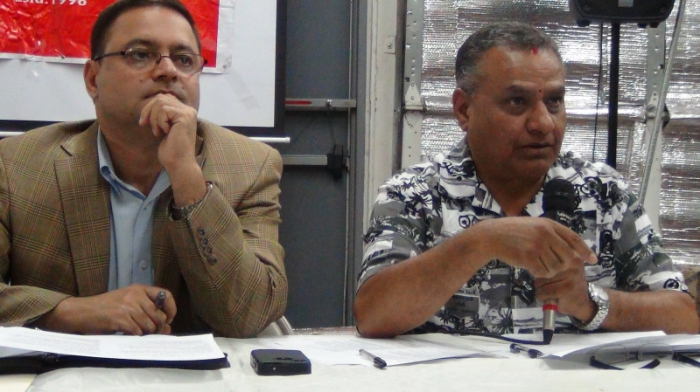 Respected Friends,
All of you people living far away from Motherland Nepal in Texas, USA, have been working for Nepal, Nepali People, Nepali Literature, the development of Nepali society andculture, which in itself is an appreciable and praiseworthy work. I am really very glad to get a chance to meet you during my visit, and to share ideas about my organization, its activities and achievements with you.
You may have already heard about my organization, Anti Corruption Movement Nepal, and its achievements regarding the fight against corruption in Nepal.

"Control over corruption is one of the main conditions for economic growth. Without economic growth the living standards of the people cannot be upgraded and unless the population’s standard of living is raised, there will always remain political instability, which is a major constraint to development. Thus, ending corruption might be the start for the development of any nation."
As for the development of the state and its people, we certainly need to raise a strict voice against corruption and start fighting against it, working with anti-corruption organizations. Today we are here to foster this idea together and start to work united against such a factor of deterioration.
Today’s meeting is a great opportunity for those, who are fed-up with the corrupt system but have not been able to raise their voices against it yet, because from now on you can work with Anti Corruption Movement Nepal. Let's stop worrying and start working! Giving priority to such work is our cause's major need.

Additional state funds cleared by the completion of the aforesaid activities:
1.    MPs Pension: Rs. 2 Crore (200 Million)
2.    Election Development fund: Rs. 60 Crore (600 Million)
3.    Sum of money recovered from Prakash Dahal: Rs. 2 Crore (20 Million)
4.    Dismissal of Officials Facilities: Rs. 50 Crore (500 Million)
In total, it seems that Rs. 1 Arab 32 Crore (1 billion 320 million) have been immediatelysaved and in the long run, considering the expenditures of 4 years of Constitutional Assembly, it should save around Rs. 2 Arab (2 Billion)per year.

Talking about the 'Vet Yatra' (Meeting Journey) of Anti Corruption Movement Nepal, we were able to finish following two activities:
1.    Direct corruption on the development fund provided to VDCs and Municipalities was contained, as political leaders and political worker formerly misused those funds for their personal benefit.
2.    Deforestation in the forest between Kanchanpur and Dadeldhurawas stopped immediately. 1 lakh 50 thousand Cubic foot wood was seized, and the value of that wood was evaluated to be of at least Rs. 20 Crore (200 million).

These operations mark a remarkable advance in the fight against corruption. Now, if all sectors start to help this organization, together they can make the difference and achieve corruption control at the national level.

Thus, in order to fulfill this pure and hieratic ambition, we would like to welcome all helpful hands and accompany them in their quest for justice. Let's prepare a corruption-free nation.